When it comes to bringing web applications to a desktop enviroment the choice falls on Electron as it's the most popular framework among web developers. We offer support for Electron applications already, but the downside is always there: it's a 3rd party solution that we have no control over.
At the end of the last year we asked ourselves if we can provide an alternative that fits us better. A few months later here we are about to release a beta version of TMS WEB Core v1.7 with Miletus!

What is Miletus exactly?

Named after Thales of Miletus, Miletus is a framework that enables TMS WEB Applications to run as desktop applications and it also provides access for native features. In a nutshell, you can fully reuse code created for a web application, take advantage of HTML/CSS for creating a modern & spectacular responsive user interface, access local files & local databases or closely integrate with operating system capabilities and still easily deploy the application as standalone executable.
Our colleague Holger Flick explains it in more detail how one could create such Miletus application with TMS WEB Core:
Let's take a look at the available classes, functions and components that will enable you to interact with native operating system functionalities!

What about database support?

While the beta version of TMS WEB Core v1.7 is about to be released with built-in Miletus support for creating Win32 or Win64 applications, we are already working hard on bringing Miletus to both macOS and Linux as a cross platform alternative in TMS WEB Core v1.8! April Fool's Day has already passed but if you still have any doubts here's a sneak peek of our TodoList demo running on macOS! It is the exact same project as the Miletus TodoList demo for Windows but packaged as macOS application. 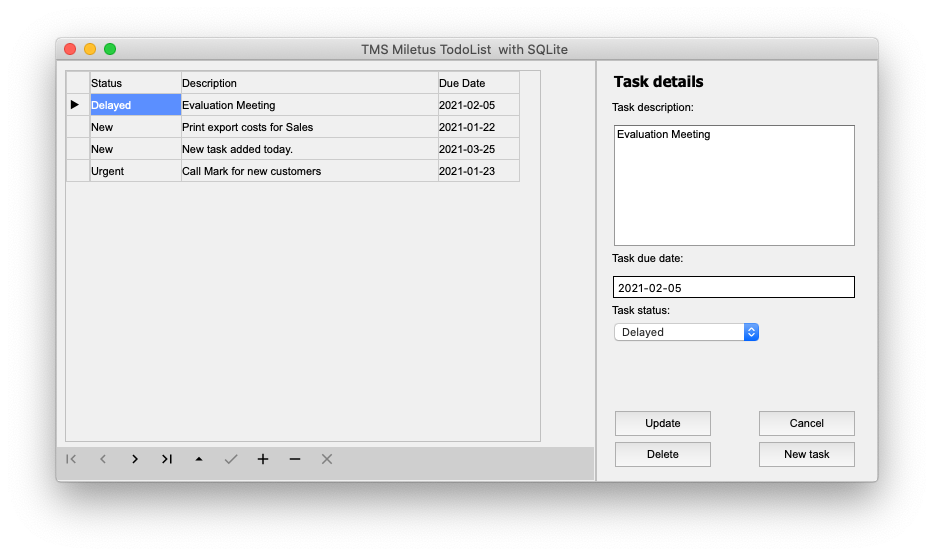 As we have full control now with this technology to expose operating system features to the Miletus app and to define how such application integrates with the operating system on Windows, macOS and Linux, we will continue to extend OS integration support. We are eager to learn for what type of applications and for what functionality you would wish to use this technology!

I think the goal should be to have ONE TOOL-CHAIN that lets you target all 5 platforms: Windows, Mac, Linux, Android, and iOS.

So many vendors are going with a "mobile-first" approach to things that this is the first thing a lot of folks ask for. But there are some types of apps requiring a large display area that are nearly impossible to use on tablets, let alone phones.

I do hope you pick a different nomenclature than Miletus for this, however. We''re not dealing with diabetes after all.

2. Saturday, April 03, 2021 at 11:19:10 AM We believe PWA is the best for targetting mobile. No store limitations or censorship, immediate updates without waiting for stores to publish, no stores interfering with the possible monetizing of the app, with PWA install & offline use, it is very close to a native app experience. And TMS WEB Core supports PWA since some time now.
The name is Miletus and not "mellitus" associated with diabetes. The name is inspired from Thales from Miletus: https://en.wikipedia.org/wiki/Thales_of_Miletus

3. Sunday, April 04, 2021 at 6:44:34 PM Will you focus your further efforts on this new framework? Meaning that the support for the Electron framework has no priority for the future anymore? I was hoping for a SQLite local access component for the electron framework.

4. Monday, April 05, 2021 at 8:30:51 AM One does not necessarily exclude the other. Our team focuses on where customer demand is. The best way to gauge interest in electron specific features like SQLite is to add it to feature requests users can vote on at: https://www.tmssoftware.com/site/fr.asp
Note that Miletus database access is based on a fully different technical approach than electron and therefore could already support SQLite out of the box.

5. Friday, April 09, 2021 at 11:22:31 PM I''m worried you are going in the wrong direction. Delphi already makes desktop software at its best. Making the web core work more comfortably with well-known javascript frameworks will attract more customers. I have a criticism other than that. Your demos are insufficient. There are hundreds of videos for every programming language, every framework, every development environment. For example, make a shopping site in 1 hour. Make a dashboard in 1 hour. You also have to make video series. Do not think it is written in the user manual. Or don''t assume we made a video of relational tables for xdata, for example 3-4 years ago. Versions are constantly being updated. people need tms projects that solve real world problems. they want to watch videos of them. You are doing a very hard job when there are so many free software development environments on the market. And you need to tell potential developers how easy and beautiful Tms webcore is. Even those who are a little bit interested in these things get lost in the user manual. You need more and more videos. I''m sure many people will agree with this.

6. Saturday, April 10, 2021 at 3:43:39 PM This is not something about ''going in a direction''. Miletus does not affect in any way other ''directions''.
It is not an OR story, it is an AND story.
Yes we realize that there is always a need for more examples, videos, training, doc, ... and we are always working on this.
We did the huge effort to bring our TMSWebAcademy (https://www.tmswebacademy.com) for example via which we have an additional channel to bring learning experiences.