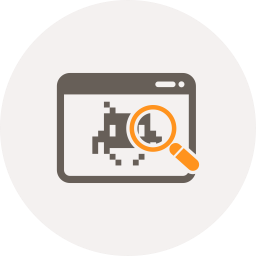 With the ever growing number of TMS WEB Core UI controls we have and the ever growing complexity, testing web UI controls becomes a non-trivial task. Our team clearly has a need to allow an efficient way testing not only by the developer of the UI controls but also by other users. One of the chores for testing a UI control with numerous settings that affect the appearance and the behavior, is that typically an application needs to be developed that will surface all the combinations of settings. And then we are not yet talking about interactions between multiple UI controls. So, we found ourselves both writing a lot of test application code and also going a lot through the cycle of configuring a UI control, compile, run, test and repeat with other configurations.

Out of this laborious experience, the idea for creating a test environment was born. We wanted to have a runtime test environment for the TMS WEB Core components. Wanting the ability to test with every possible property setting of the control and realizing we had in our TMS FNC UI Pack component library an object inspector control, developing this test environment turned out to be faster than we imagined.

After using our test environment for a while now, we realized that this would probably also be interesting for users new to the TMS WEB Core framework. It allows to play with the TMS WEB Core UI Controls directly from the web without the need to install anything. It allows to learn all features and capabilities and discover the rich set of controls meanwhile available that can help you build your web applications. So, we thought of a name for this environment and came up with "Component Explorer".

During these 2 weeks of visits to the TMS lab, we wanted to show you the experimental version of our Component Explorer. You can use it to explore our TMS WEB Core UI controls, play with it without installing it, experiment and test. And oh, of course we would appreciate if you'd let us know if you find an issue so our team can look into it.

Head to http://www.tmssoftware.biz/tmsweb/demos/ComponentExplorer now and discover. 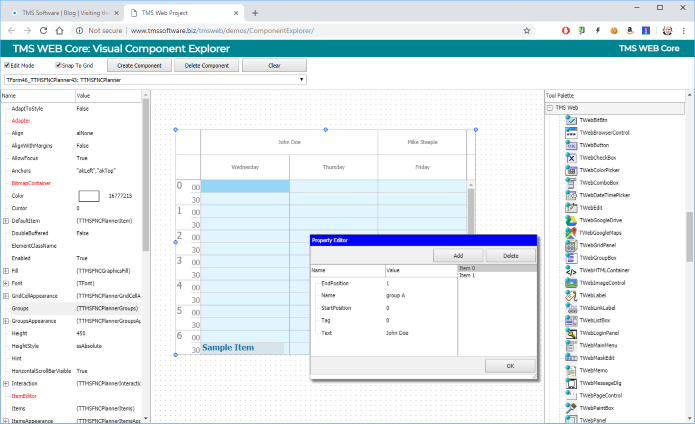 Some notes for your information:

Meanwhile, you can go ahead and explore the new & exciting territories of web client development that become available for Delphi developers with TMS WEB Core! You can download the trial version that is generally available, go ahead with the standalone version you purchased or with TMS WEB Core and additional tools that are all included in TMS ALL-ACCESS. Or you can come to see TMS WEB Core and discover and discuss it face to face with Bruno Fierens of tmssoftware.com showing it in London on October 23, 2018. Note also that in October, you can still take advantage of purchasing TMS WEB Core at launch price from 295EUR for a single developer license. From Nov 1, regular pricing will be active on TMS WEB Core (395EUR for a single developer license).

2. Wednesday, October 10, 2018 at 3:36:50 PM This is work in progress and an internal project for our testing purposes. At this moment, this is not an open-source project.

We are following with excitement...

Next step will be a complete, WEB based, full-stack IDE with server-side compiler ? :-)

Can be code named Zephyrus, the greek god of the west wind ;-)

7. Wednesday, October 10, 2018 at 5:54:12 PM Please, add component like TinyMCE, to have rich edit control with ability to upload and insert pictures to the text. Also add to demo page grid with big data to see how fast does it work.

11. Friday, October 12, 2018 at 4:36:58 PM I confess that i read this post 3 times, not because it''s hard to understand but to believe that how you guys could pick one complex environment like web is and make it so easy to use and extend and this framework is in the first releases version, and certanty we can agree that so great things will blow us in short term.

12. Saturday, October 13, 2018 at 3:17:24 PM Simply amazing solution, using the ability to create and modify in run-time all component add to it the power of PWA and afterward when TMS developer the component to access directly hardware and database such as SqLite, we''ll be able to create stunning solutions.
Delphi and TMS are a couple of year ahead of any other competitor....